Here are the fruits of a mini-seminar on git from the inimitable Mary—a sketchy portrait of the inner workings of git.

Git: The Bestest Version Control System with the Worstest UI

All of your Git-age lives in the .git folder

When you run git init, all it does is create a .git folder. That’s it! Your machine knows what folders are and aren’t git repos by the presence or absence of a .git directory. .git is a hidden folder, so to see it, type ls -a. Whenever you add or commit things to your git repo, they’ll get stored in here.

I’m now in the directory of my new project, gittest. It contains two files, a and b, and isn’t yet a git repo. When I look at what’s inside it, it looks like this:

Let’s make it a git repo:

We can see the .git folder! Success! Here’s the stuff inside it:

The git magic happens largely in the /objects folder. Right now it’s got two folders in it that we don’t care about, info and pack, which have to do with misc. git magic. But this is where stuff goes when we add/commit it. So let’s do that.

31 and e9 are both folders, and each has only one object in it, files with big long gibberish names: 31/e9dce72edaeb87f2b007b09230bfd5008da63e and e9/1ace6ef46e2244fc3588bdead8f66b35b20d12. They contain gibberish, which is fancy git compression/encoding of the contents of file a and b. The folder name and file name, taken together, make a big long hash that you can use to recover the original file contents1 (xx/yyyyyy —> the hash xxyyyyyy):

These big long hashes point to files, known in git-land as blobs. Right now these are staged. After we commit them, .git/objects looks like this:

We have two new directories in here since our commit, both in the same xx/yyyyyy format where xxyyyyyy is a big long hash thing we can use to access the thing inside. Here’s the stuff inside the two new things:

The first thing is a commit object. It lists a tree object, author, committer, and commit message (which here is “first commit”). The second thing is a tree object: it contains references to all files or folders (which would also be tree objects) in the given commit. This tree points to our files a and b (identified by their magic git hashes).

OH, but also, from the second commit onward, commit objects look a little different. They have one additional line that provides the hash of the parent, or the commit directly before that one. I added a file c in directory foo. Here’s what my second commit looks like:

To sumarize, the three kinds of objects you’ll find in .git/objects look like this.

#####Commit: tree: [hash of tree pointing to the files of this commit]
author: [name]
[commit message]

####How a few commits might look Git objects contain the hashes of other git objects, which is how the files keep track of each other. Given a commit, you can find the tree representing the root, and from there all of the files and/or folders (represented by trees) that it contains. From that same commit, you can also find it’s parent commit, and then its parent, each with their attendant file-states, and so can trace your history back. Let’s look at fun diagrams!

Now let’s say I add a directory foo, and a file in foo c, and make changes to a and b. The file tree now looks like this, and my git looks like this: 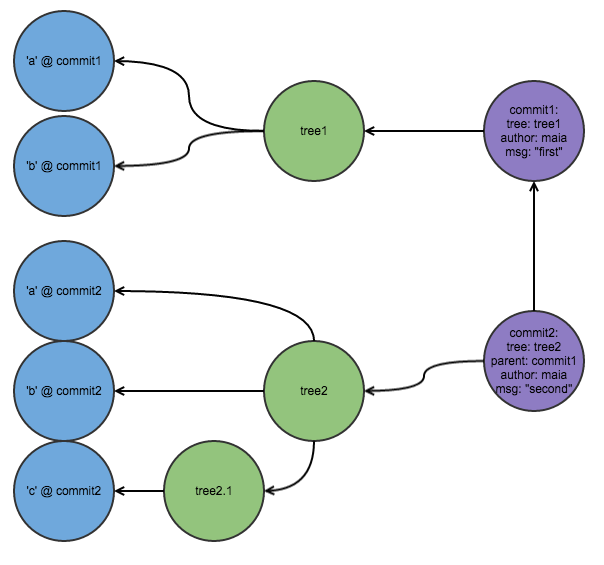 You see that the main tree, tree2, is pointing directly to a and b but not to c—rather, it points to tree2.1, which points to c. It looks this way because git uses trees to represent directories; it references files living in subdirectories via trees (representing those directories) referencing those files.

Note that git is still storing (in super-compact encoded form) all previous versions of the files, and given this network of things-that-contain-hashes-of-other-things, we know exactly where to look for any version of any file we want to find. And git only makes the necessary changes. Look what happens if we change a and c but leave b the same: 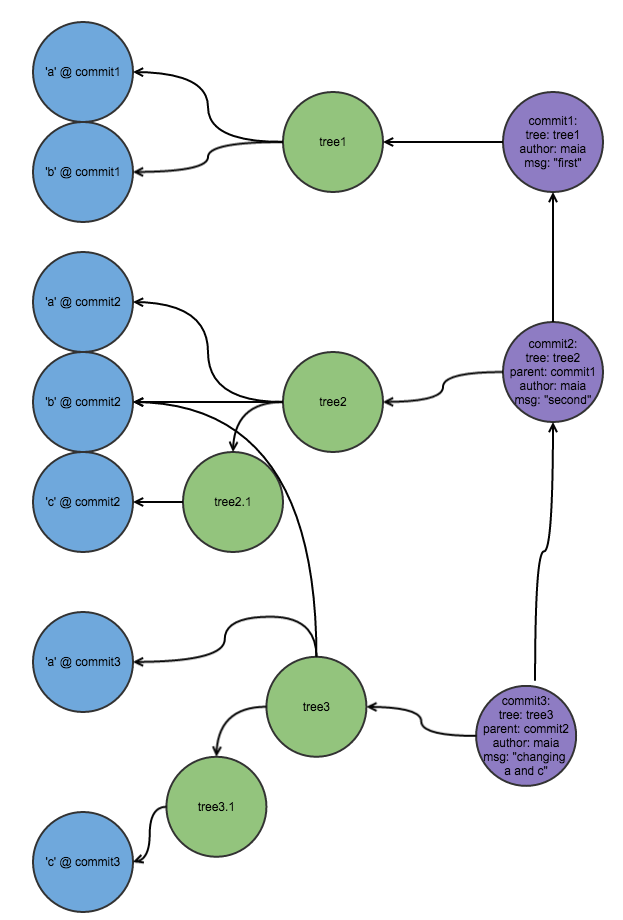 There’s no need to make another representation of b, since b hasn’t been changed this commit. Instead, where the tree has to point to b, it points to the hash of the existing version of b.

So, now I understand a biiiiit more about the whacky world of git and just what these cryptic commands are doing! I even understand pointers and branching and detached head state and all that a bit better, but that is perhaps another post for another day. Cheers!